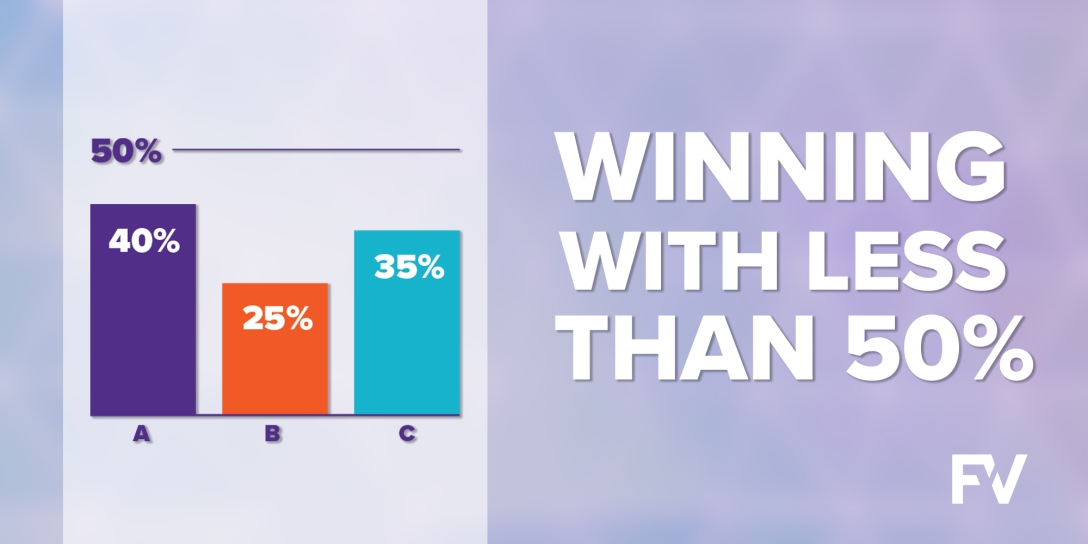 I’ve been carping about our two-party plurality electoral system for so long now that many of you are probably wondering what I would replace it with. This will take quite a bit of explaining and illustrating, so I’ll break it down into several pieces. The first step is to illustrate the problem. In Part II, I’ll start discussing some of the alternatives to plurality.

For those of you who browse with images turned off, now would be a good time to turn them on. Don’t worry, these are small GIF files, so this won’t be bandwidth-intensive. If the images are too small, you can click on them to get a closer look.

Okay, this is a representation of the electorate, from liberal to conservative, where each ‘X’ is a voter. I know there’s more than one dimension of political thought (the whole Political Compass thing), but what I’m trying to show would still hold true for two and three dimensions, which I’ll illustrate in a later post. I’ll stick to the one dimension for now, for the sake of space and simplicity. Note that there are more moderates than extremists.

With me so far?

Now, in our current two-party system, this spectrum is divided into two political parties, the Democrats (the blue D’s) and the Republicans (the red R’s). For the purpose of avoiding a tie, I’ll show 10 Democrats and 11 Republicans:

Each party holds a primary to pick a single candidate to represent them (I’ll get to the whys later below). I’ll call them “Bill” and “Ron” because… um… those are short names. Resemblance to any existing people in real life is entirely coincidental (spare me arguments about where specific candidates actually were, this is just an illustration):

Note that while these candidates are representative of their own parties, they aren’t representative at all of the moderates, represented in gray. This is one reason that moderates have a low voter turnout. They tend to hate both candidates pretty equally.

There are other reasons, like that in the race to the center, they often take positions that conflict with their party’s ideology and thus result in inconsistent platforms. I explored this phenomonen of political opportunism a bit when I discussed why Dubya chose to abandon fiscal responsibility. Note that this race to the center tends to be little more than illusion. A campaign tactic designed to make a candidate appear more centrist than he really is (which I think was illustrated pretty well by Dubya).

And if the candidates are poor representatives of moderates, they’re even worse representatives of anyone from the opposing party. Note the result of this election, won by Ron, 9 to 8 (assuming those four moderate voters stay home):

And if the two moderate Democrats do decide to vote, that swings it the other way, to a result that is equally unrepresentative of the country as a whole:

The result is that our government, which is supposed to represent the entire country, instead ends up representing one end or the other, swinging wildly back and forth much more than the country and the electorate actually shifts. This is one reason why some political theorists decry plurality as one of the only electoral systems that can pick a candidate despised by two-thirds of the electorate (the spoiler effect I get to later below can make this even worse).

So where would be the best candidate to represent the entire country, and not just one side of it? I hope it’s pretty easy to see he would be here (hmmm, he looks familiar):

Since there are slightly more conservatives than liberals in this illustration, note the winner is slightly to the right. And if the country shifts a bit to the left, the winner should be located here:

Why don’t we ever get candidates like this? Because the plurality1 electoral system forces us towards a two-party system. This is often called Duverger’s law.

Such a fancy-schmancy name, but the reason plurality systems promote a two-party system is pretty easy to understand. In such systems, additional parties and candidates have a spoiler effect, which was illustrated by Ralph Nader in 2000:

Note, in the above simplified illustration, 3 voters that would otherwise have voted for Gore voted for Nader instead, reducing Gore’s votes from 11 to 8, and handing the election to Bush who still has 10 votes (I’m not saying Gore didn’t make his own share of mistakes — I’m just pointing out an obvious flaw in our electoral system). Some people believe Perot had a similar effect on the Clinton-Bush race, but that’s much less clear.

Note that even a more moderate third candidate has an identical effect. Take the hypothetical example where John McCain runs against both Bush and Gore:

Even though the electorate would prefer McCain to either Bush or Gore, Bush and McCain end up splitting the vote, handing the election to Gore.

And with more than three parties, this spoiler effect occurs in multiple places at once, making it more likely that an extremist candidate wins, as illustrated below:

Note that Art or Ed would win, since they’d each have 5 votes, and nobody else would have more than 4. And clearly, Cal would have been a much better representative of the electorate than either, but would split the moderate vote with Bob and Deb. This spoiler effect is exactly why a plurality system tends towards a two-party system. The above parties realize that they need to join forces, and eventually you’d have the two conglomerates of unlikely bedfellows2 we have now.

This spoiler effect is also why the two parties have their primary elections staggered in time. This allows potential spoilers to realize they have little hope of actually winning and thus pulling out of the race before having this spoiler effect. Of course, there are issues with this approach as well, namely that earlier voters now have a much bigger say on the outcome than later voters. But the parties consider this preferable to the possibility of ending up with a fringe candidate who stands no chance of winning.

Americans pretty much assume the spoiler effect is an inevitable effect of elections. It isn’t. It’s only an effect for plurality elections, which is why voting theorists all agree plurality is one of the absolute worst voting methods of all. We don’t use plurality because it’s the best. We use it because we didn’t know any better when we picked it. We only continue to use it because we’re all used to it — and because the two parties have a vested interest in keeping it that way.

But there are much better alternatives. The most well-known one is Instant Runoff Voting (IRV, now better-known as ranked-choice voting), which I discuss in Part II: IRV, an Improvement. Two others that I think are even better are Approval voting and the Condorcet method, which I’ll cover later (Update 9/28/21: before I wrote posts to cover those, political science professor Matthew Shugart convinced me that ranked-choice voting was better). Note that I’ll be covering single-seat elections first, so I’ll get to Proportional Representation after I cover those three.

Why should you care? If you’re a Democrat, plurality (and Nader) screwed you in 2000. If you’re a Republican and don’t like Bush, plurality prevents McCain (or whomever you’d prefer) from running against both Bush and Kerry. If you like a third party, like the Green or Libertarian Party, plurality keeps people from voting third parties because it’d be “throwing away their votes.” If you hate both Bush and Kerry, plurality keeps moderates from running against them. If you don’t fall into any of those categories, well, you should care anyway because the likelihood is that plurality will eventually screw over the candidate or issue of your choice if it hasn’t already.

Move on to Electoral Reform, Part II: IRV, an Improvement.

1 Sometimes called first-past-the-post. It’s our current electoral system where the most votes wins, regardless of whether it’s a majority. Return.

2 For example, libertarian-leaning fiscally conservative social liberals being in the same Republican Party as the Christian Right. Return.

3 thoughts on “Electoral Reform, Part I: The Problem with Plurality”