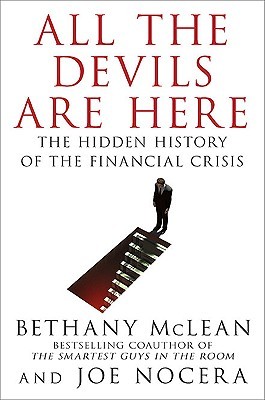 I consider All the Devils Are Here to be the best book on the financial crisis I have read so far, edging out Nouriel Roubini’s Crisis Economics and significantly better than Michael Lewis’s excellent Big Short. Roubini excels more at explaining more of the economics in systemic big-picture terms and also laying out reform proposals to prevent the next crisis, but overreaches quite a bit with the latter and reads a bit more like a textbook due to a lack of characters and narrative. Lewis has plenty of narrative, concentrating on several individuals with a good view as to what was going on, but is a bit narrowly focused.

All the Devils Are Here has a decent mix. It has a very comprehensive scale. I’ve read a significant amount of academic literature on the topic, but this one still filled in the gaps, as I didn’t yet have a good grasp of what was going on in the ratings agencies. I also learned a lot more about the role of the GSEs (Fannie Mae and Freddie Mac) from this book. It also has plenty of vivid characters playing a variety of roles. There are almost too many, and several seem a bit stock in nature, but it still holds together quite well. Despite the topic, it’s a rather quick and lively read, and the interaction between Brooksley Born and Bob Rubin is probably the most gripping (and a better treatment than the Frontline special on Born).

Unfortunately, neither author is well-versed in economics, so it’s a rather short on analysis and has absolutely no reform proposals whatsoever. This is both a pro and con, as it refrains from being overly didactic and/or political (both flaws of Roubini’s book), but it also makes for somewhat more superficial coverage. I can see readers leaving with the impression that the crisis was due to bad people doing bad things when there are numerous systemic economic issues at its core, but the book does indeed cover these issues (particularly the conflicts of interest at the ratings agencies) even if it doesn’t put them center stage.

A bigger flaw is their treatment of the Federal Reserve. This is where I think the authors should have consulted more people with an economics background, as they seem to have the impression that the Fed’s role in the economy is largely regulatory when in fact its primary role is to conduct monetary policy — controlling the money supply. The Fed was the one supplying the excess dollars that inflated the bubble, and this is one of the few points largely agreed upon by economists (even if they disagree on what, if anything, ought to be done to address this).

Still, they get it mostly right (having a decent grasp of the importance of incentives and information and how securitization made a mess of things) , and considering the vast scope of the crisis, it is probably nearly impossible to cover everything and still have a readable book. Despite its minor flaws, I consider this book both a must-read and a very enjoyable read as well.

Slightly edited from my original review on goodreads.com.

1 thought on “Review of All the Devils Are Here”