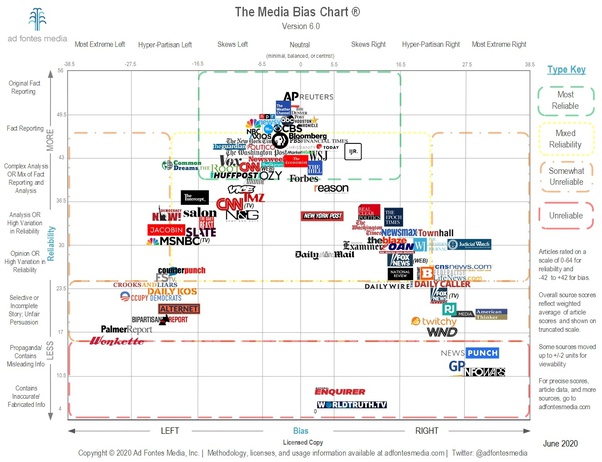 In my experience as an investment professional who relies heavily upon the accuracy of my news sources, they are two of the least biased sources. I have a bit more experience with Reuters since my employer bundles it into our market data application, but I have never run into had any bias or accuracy issues with either source (and every criticism I’ve seen of the bias from AP or Reuters fails to name a less biased source — and remember that it is impossible for any source to be perfectly unbiased).

Given the rising prevalence of factually inaccurate content shared on social media, media bias has been a core issue of mine for a few years. The source of media bias ratings that has most won my trust after years of searching is Media Bias / Fact Check (MB/FC). I have found them to be more accurate and comprehensive than Ad Fontes Media and AllSides. If you’re aware of a better one, please let me know.

MB/FC rates AP as “Least Biased” with a factual rating of “Very High,” and rates Reuters similarly. Ad Fontes Media and AllSides hold them both in similar regard. Here’s Ad Fontes Media’s chart, which shows the most reliable sources near the top and the most objective sources in the center between the left and right sides:

Now, I often run across people who denounce the reliability of all mainstream media. This seems to indicate a misunderstanding of markets. “The media” is not a single homogeneous entity but actually a rather crowded and competitive industry where the barrier to entry is actually rather low. These days, anybody can upload a video or write a blog post or tweet. If there was a viewpoint being excluded, that’s an under-served market niche that would be profitable to fill.

Such people also tend to share inaccurate or heavily partisan content from social media (e.g., Facebook and YouTube). Remember, when a product that is free, odds are that you are actually the product. Someone else is probably paying for your eyeballs or your data. This is true for both television (funded by advertisers seeking eyeballs) and social media (funded both by advertisers and also by selling personal data). AP, Reuters, and also JSTOR are the rare exceptions that have institutional subscribers and offer a limited version of their services for free.

Social media content in particular tends to be highly inaccurate because there is no mechanism for accountability. Someone found to be sharing something false bears little cost because they can just delete the inaccurate post and act as if nothing ever happened. Social media companies may take such content down, but as controversial content increases engagement, they face strong incentives against doing so. I strongly recommend against getting news from social media for this reason.

Both television and social media content also tend to be sensationalist (violence and fires attract more eyeballs than peaceful protests), but television is particularly problematic because it is much more difficult for journalists to be objective in video than in the written form.

If my reasoning doesn’t convince you, just look at the data from Pew Research in the graph to the left.

Biased media sources and most social media content are essentially advertisements and propaganda, usually for political parties that already have too much power. They’re not worth your time just like watching television commercials or the Home Shopping Network is not worth your time.

Reposted with minor edits from Quora.

View all posts by perfectlygoodink