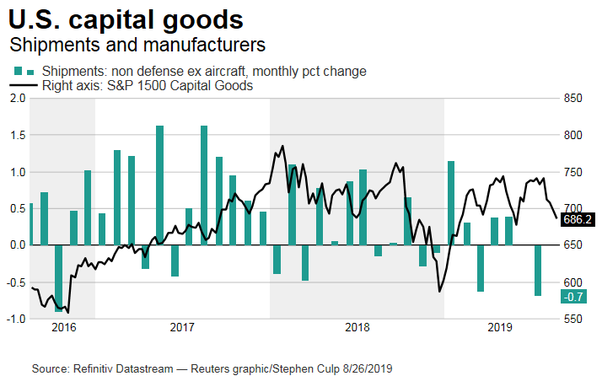 There are three prevailing theories: 1) insurance 2) political pressure 3) market pressure. Regarding the first theory, Fed chair Jerome Powell may be trying to pull off what Greenspan did in 1995 and 1998. Powell has characterized both the rate cut in July and the most recent one in September as “insurance.” What he means… END_OF_DOCUMENT_TOKEN_TO_BE_REPLACED

The fiscal authority is Congress (along with the president), which passes budgets regarding federal taxation and expenditures. In economics, these types of actions are called fiscal policy, which means Congress is the fiscal authority. Tax cuts and increased spending can stimulate an economy to fight unemployment, and the opposite actions can cool it down to… END_OF_DOCUMENT_TOKEN_TO_BE_REPLACED

In regards to the big Supreme Court decision on Romneycare Obamacare, there's been much hand-wringing on how this is a tax on doing nothing. This does seem odd, until you realize that a penalty or tax on one group but not on a second group is economically identical to having no penalty or tax on the first group but a tax credit… END_OF_DOCUMENT_TOKEN_TO_BE_REPLACED

Updated on 9/28/21 to add image via Yes! Media and mention of ranked-choice voting. I had originally intended this to be part of a four-part series that also covered Approval Voting and the Condorcet Method, which was my favorite method at the time, but political science professor Matthew Shugart convinced me that ranked-choice was better.… END_OF_DOCUMENT_TOKEN_TO_BE_REPLACED

Image via FairVote. Originally posted at "fling93 loves fishies," my old blog. Migrated, updated links, and added featured image on 9/21/21. I’ve been carping about our two-party plurality electoral system for so long now that many of you are probably wondering what I would replace it with. This will take quite a bit of explaining… END_OF_DOCUMENT_TOKEN_TO_BE_REPLACED

Now that the economy appears to be on the right track again, I'd like to revisit what I think was the cause of the 2001 recession. I run across too many people who take a partisan stance and blame it on Dubya or blame it on Clinton. Really, the President doesn't have as much power… END_OF_DOCUMENT_TOKEN_TO_BE_REPLACED